For the past several months I have had the opportunity to work with a non profit organization by helping them to improve their outreach and understand what their email subscribers are looking for. The client also wanted to see how they could expand their reach to a younger audience. A big portion of what I did during the semester was analyzing data from surveys sent out this semester, reaching out to other non profits, and curating a social media content calendar.

Throughout the project I was met with learning opportunities by taking part in tasks that I had never done before. One of those in particular was coming up with ideas for a content calendar. While I worked with a team, I came up with the main guidelines of posts that they could use for the next year. It was a bit of a challenge for me initially to try and be creative so that they too, could have some variety in their social media postings but also a steady flow. Each week had its own set of topics and postings. For example the first week of the month had its own assigned postings as did the second, third and fourth. I had it so this patterned continued throughout the allotted months. Then we went back over the calendar after the general format had been made to include variety as far as holidays were concerned. Here is an example of a general guidelines they could decide to use or not, with posting ideas but that enabled the client to change the topic.

We also created a survey to be sent out their email subscribers so get some kind of idea of why they signed up to receive emails and what kind of demographic was receiving the emails. From the initial survey we sent out we created personas or profiles for who people who we found to be the most likely to subscribe and why. It was a very interesting process seeing what kinds of people liked receiving their emails. We found that there were two major groups within the survey respondents and from there created profiles to show to our client. Below is an example of one of those profiles with the general information about what the data told us about this person.

While we were able to gather quite a bit of information based of the initial survey, we wanted to expand further to see why or why not people chose to donate to their cause and what their organization could do to improve their social media. From that survey we found that a lot of their subscribers were not avid donators and most of them did not use social media or were not aware that their organization was on Facebook and Instagram. It was very interesting to see but it showed that the majority of their audience were older people who don’t use social media. Another big finding was that a reason why people were not donating was because it did not fit within their budget and they were not aware of what the funds were used for. From these findings we were able to give our client some helpful tips to try and reach a younger audience and to help people to know where their donations are going. Some of those ideas included making the donations button more obvious on their webpage, simplifying their email sign up form, posting more positive content, and making their social media more personable. We also came up with guidelines for their postings like, having their website linked to posts so they can get more traffic on their website. We also included the importance of having calls to action on their posts so that people know what to do and how to do it. Below are some examples of the survey findings and what the data indicated. 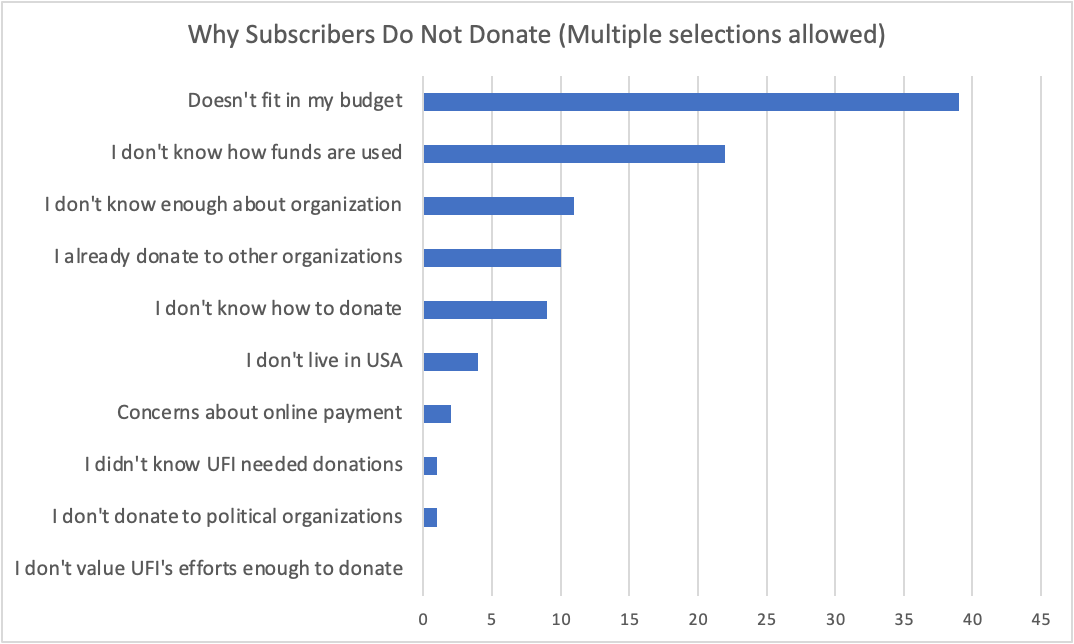 Overall I felt that we were able to provide a lot of information to help our clients organization to build more of a following and helpful tips to keep people informed but not to overwhelm them with information. It was a new experience for me working on some of these projects but it allowed me to use some of my data analytic skills and provided me to develop social media marketing skills. I did not realize how much of a role communications and marketing play in non profits. It was very informative for me to see how the process of knowing your audience plays out in non profit work. I felt that I was able to do my part and be helpful in the process of helping my client and am grateful for that opportunity.